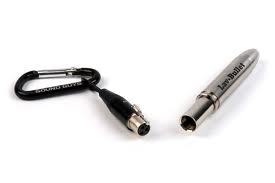 Every once in a while a very innovative product comes along… in this case, the Lav-Bullet.

It’s a simple idea that is extremely useful, especially if you need to run a mic wire down through the pants to an ankle strap… but is also very useful to get the wire through a shirt quickly.

It is a solid weighted piece of metal that looks like a silver bullet. It sports a TA5/3 connector (also a Lemo version available) to allow you to attach the transmitter end of the lav directly to it.

It comes with a handy carabiner and clip to hang the Lav-Bullet from your cart or belt.

It’s only Achilles’s Heal is that the screw in TA connector is thin metal.  My utility dropped it twice and the connector broke… effectively destroying the usefulness of the Bullet.  Fortunately, we had a second Lav-Bullet on hand.

Sound Guys sent a replacement envelope that  took a few weeks to get… the only problem was they sent it in a standard white paper envelope… from which a hole surfaced and the replacement must have fallen out in transit.

We found you could get a standard Ta-5M sleeve to fit it from the local electronics store.