The Ultrasone Pro 750 Headphones feature a closed-back and stiff titanium-plated drivers.  They are also very comfortable and designed with elements that are easy replaceable.  In using them for the past year, I have found them to be a good set of cans. However, that being said, I’ve also had some issues with them.

I bought them for $399, but if you look around you can find them at a better price. 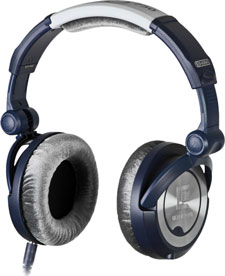 1) Sound – First off, because out-of-the-box the cans sound very “tinny”, it is very important to season these headphones  for a few days by attaching them to your stereo and playing music with a large frequency range (i.e. classical).  Personally, I feel the seasoning should have been done at the factory, and when I asked Ultrasone why they don’t I didn’t get a great answer.

Sound wise, I find them very easy to work with.  However, I do think they tend to be more mid-range heavy when compared to other professional headphones.

2) Comfort – One thing I REALLY like about these headphones is how they fit. The earpads wrap AROUND my ears and feel great, even with glasses on. They also are great if you like to boom on top of your head. The pad at the underside top takes alot of pressure off your noggin’.

3) Design – They are designed to fold-up similarly to the Sony MDR-7506s. They feature quick removable headphone pads and a screw on cable that you can switch out between a coiled or straight cable. The cable features a 1/8″ adapter on the headphones end and a 1/4″ jack on the other side.

The Pro 750’s also have a feature called “S-Logic Natural Surround Sound”, which is fancy talk for “the driver is placed to the front of the cans rather than the center”. They do this so the sound appears to come from in front of you rather than the sides and funnels down your ear canal easier. The idea is that it takes less dB to sound as loud, thereby creating less ear fatigue at the end of the day.

Another small, but well thought out feature is the placement of the cable attachment to the headphones.  It’s on the left side, like all other headphones, but the pushed it about 20 degrees to the rear. The effect is that the cable goes back and around, avoiding brushing your neck or chin.

They are designed to have a larger range of rotation in the headphone cups. This is nice to pull them aside from your ear to listen with your bare ears to a sound. I have found them to be slightly creaky when initiating this action. Of course, it sounds louder in your ear than it will on set though!

3) Durability – Hearing from other mixers, the Ultrasone’s were prone to some cracking on the headphone band. I think this has been fixed in the newer version as I have not had that problem. I do notice some small stress marks in the plastic, but nothing serious to me. I’d say they are holding up well.

4) Accessories – The 750’s ship in a nice fold-out hard carry case that also houses an alternate cable (comes with a coiled and straight), two spare ear pads and a 1/4″ to 1/8″ adapter.

I like them very much, but I wish the frequency response in the upper and lower were stronger and the issue with the creakiness in the plastic connection would be resolved. I also think they should come seasoned from the factory. However, they have some strong features and I am still using them as my primary cans for now with Sony’s MDR-7506’s as my back up.